Artwork: Mary Magdalene & Jesus at The Last Supper
Note Da Vinci's Code: the hand of the deciple at Mary's neck signifying the
beheading of John

New genealogy ... from the HOUSE OF HEROD

Salome III of 7 Veils fame, later known as "Mary Magdalene/John the Beloved," was the dau. of Herodias, Jewish Princess and her uncle Herod-Antipas, Tetrarch of Galilee.

She first married at Canaan Herod-Philip II, later known as "John the
Baptist," half-brother to Jesus. She was later forced to be involved with (around age 16) the beheading of her own husband.

They had one son, Herod Timothy; "The Herodian," later adopted by his uncle, Mary M's second husband (or common-law spouse) Aristobulos III, later known as "Jesus," Lord; King of Chalcis.

John's parents were Antipater III, also known as "Gabriel," executed 4 BC and his father's (Herod I) wife, Mariamne II, also known as Cleopatra of Jerusalem, Princess; dau. of Simon Boethus, High Priest.
He was later adopted by Zechariah, High Priest and his wife Elizabeth.

For your consideration and thank you Mr. Charles Pope.

For complete generation chart and resource list, visit my site at
http://www.mismagicshouse.com/geni.html 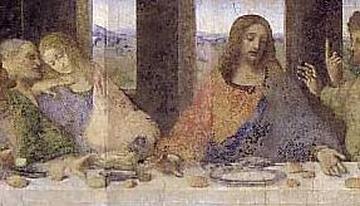 GENEALOGIE PRIMITIVE: A Work in Progress

Responses To This Message

© Charles N. Pope, US Library of Congress. All rights reserved.